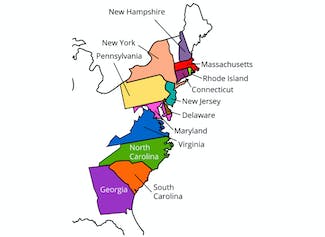 Geography of the Thirteen Colonies

General
Students learn about the 13 colonies, focusing particularly on the geography and location of the colonies as split up in their three groups - northern, middle, and southern. How did the unique geography of these areas of the United States affect the lives of the people who lived there?

Learning objective
Students will be able to label a map with the thirteen colonies.

Instruction
Introduce students to the term "colony' and explain that before the United States was created, it started as a set of colonies under the control of England. These thirteen colonies were located on the east coast of the (current) United States and were settled due to ease of shipping trade with other countries. Show a map with the thirteen colonies and give the names of the colonies. The colonies are introduced in segments, as the Northern, Middle and Southern colonies. Each colony is introduced and key information is given about the colony. At the close of each segment, students are asked to locate the colonies on the given maps. When complete, review all 13 of the colonies together on a map of the current United States.

Quiz
Students are asked a set of true/false questions in which they are asked if a certain colony belongs to the northern, middle, or southern colonies. They are then asked geographical multiple-choice questions about which state was or was not a colony, which ocean the colonies were located by, and where different colonies are located. Finally, students are asked to name all 13 colonies.

Closing
Remind students that the original 13 colonies were what started the United States as we know it today and that they can now label a map with all 13 of them. Close by having students drag the names of the colonies to where they belong on the map on the interactive whiteboard.

These are just a portion of our social studies lessons that cover the founding and earliest days of the United States of America. Start exploring by creating a Gynzy account today!