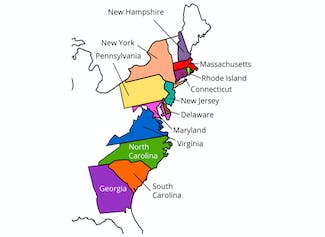 General
In this lesson, students will learn how the 13 original colonies came to be. They will explore what life was like in the New England, Middle, and Southern colonies, and learn about why settlers wanted to leave where they were to go start a new life somewhere else.

Learning objective
Students will be able to describe the 13 original colonies and the regions where they are located.

Introduction
Students will begin the lesson by making observations of an image of life during colonization. Students will analyze the image and discuss what they think it would be like to travel to this place. They will be asked to think about how they would survive and what some challenges and benefits would be.

Instruction
The lesson will go over the 13 original colonies and the time period and how they came to be. It will give a brief overview of each region, New England, Middle Colonies, and Southern Colony, including maps for visuals. The lesson will explain what life was like in each region of colonies, including religion, daily roles, and what the colonists did to survive. Students will discuss how people lived in each region and find similarities and differences between them. The lesson will also explain how the 13 colonies eventually became the United States of America.

Quiz
Students will respond to 10 questions including 7 true/false and 3 multiple-choice.

Closing
Students will complete a sorting activity where they sort the 13 colonies into the appropriate region. Then, they will write a journal entry from the perspective of a colonist to show their understanding of their daily life. They will use the spinner to write from the perspective of someone who lives in a New England, Middle, or Southern Colony. Students will also draw a picture that depicts life in the colony region they landed on to go along with their writing.

Teaching tips
Make a chart of the 13 colonies and which region they are located in. Chart key takeaways of religion, daily roles, and what life was like in each region. Keep in the classroom for students to refer to.

Related lessons
You can check out these other Gynzy lessons if you want to teach your students more about the 13 colonies:

You can also browse our other social studies lessons and start customizing them to fit your classroom today by creating a Gynzy account.