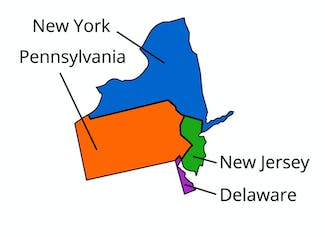 Introduction
Students will begin the lesson by recalling what they already know about colonial life. Then, using photographs for support, they will describe what they think life was like during the 1600’s before we had supermarkets, motor vehicles, and technology

Instruction
Students explore a timeline to learn which explorers founded New York, Delaware, New Jersey, and Pennsylvania and when they were founded. The students will locate the colonies on a map and learn about the influence of climate and geography on the lives of the people there. Students will learn why the Middle Colonies were nicknamed “The Breadbasket Colonies” and how the colonists earned a living to provide for their families. They will also learn about the diversity and religious tolerance in the Middle Colonies. They will watch a video to learn more about the Quaker religion. Students will also explore the daily roles of men, women, and children. Lastly, they will learn about William Penn’s contributions to democratic government policies.

Quiz
Students will respond to 10 questions including 6 true/false, 2 multiple-choice, and 2 open-ended.

Closing
Students will watch a video on the Middle Colonies, discuss what new information they learned, and ask questions they still have. Students will visit another website to learn about the biography of English Quaker leader and advocate of religious freedom, William Penn. They will then create their own timeline of his life.

Teaching tips
Chart key take-aways of climate and geography, economy, religion, daily roles, and government. Create a social studies vocabulary word wall with terms used throughout the lesson for students to refer to.

Related lessons
If you would like to teach your students more about the original 13 colonies, try these Gynzy lessons:

You can also browse some of the other social studies lessons available on the Gynzy Library. To start using and customizing the lessons, tool, and activities available on Gynzy, create an account today!