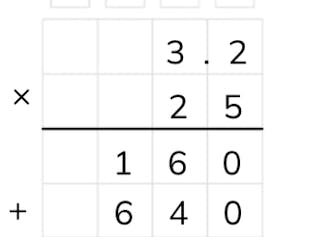 Learning objective
Students will be able to multiply using the standard algorithm with decimal numbers.

Quiz
The students test their understanding of standard algorithm multiplication with one decimal number through ten exercises. They must fill in the answers themselves, and can use scrap paper in order to write out their calculations.

Closing
Discuss once again the importance of being able to multiply using the standard algorithm with one decimal number. As a closing activity the students can work in pairs to come up with problems with decimal numbers and solve them on their own. The one student names four digits and one single-digit number. The other student chooses where the decimal point should be placed in the first number. Next both students solve the problem and check their answers with one another.