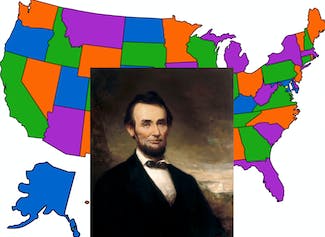 Overview of the Civil War

General
In this lesson, students will be introduced to the Civil War and its importance in the history of our nation. Students will learn about the American Civil War and understand slavery was one of the biggest causes of the Civil War. They will explore the many political and cultural differences between the North and the South. The lesson will place an emphasis on Abraham Lincoln and his role during this time. Students will watch a biography video about him and then create election posters for Lincoln. Students will then learn about Harriet Tubman and the underground railroad, as well as the Battle of Gettysburg.


Learning Objective
Students will be able to describe the American Civil War and explain its significance in our history. Students will understand the direct impact of slavery and learn about important historical figures such as Harriet Tubman and Abraham Lincoln.


Introduction
Introduce students to the Civil War, then have students examine a set of Civil War-related images. Have students click to reveal a set of questions and have them discuss their answers with their classmates.

Instruction
Begin the lesson by explaining to students how slavery was one of the biggest causes of the civil war. Students should understand that slaves were mistreated and forced to work with no pay. Continue by explaining that the Northern and Southern states could not come to an agreement on issues such as slavery and power, and this ultimately led to war. Introduce students to Abraham Lincoln and his role in the Civil War. Have students watch a short biography video about him, then students will create election posters for him.

Continue the lesson by teaching students about the Underground Railroad and its role in freeing slaves. Introduce students to Harriet Tubman and how she was one of the most famous conductors of the Underground Railroad. Visit the website to read more about the well-known Battle of Gettysburg. Then, students should write 5 new facts they learned about the battle from the article. Describe daily life during the Civil War, then explain how and when the Civil War came to an end. Describe the 3 new amendments to the constitution that were added during the Reconstruction Period, then drag the correct words to complete the sentences.


Closing
Students will summarize what they’ve learned and list any questions they may still have.

Instruction materials
Students will need the following for activities in the lesson:
-Notebook
-Pencils
-Computer or Electronic Device for web activities