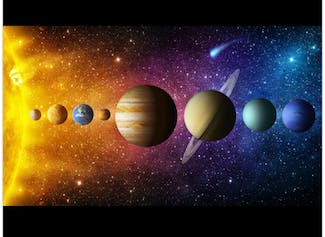 Planets and other objects in space

General
In this lesson, students will learn about the eight planets in our solar system: Mercury, Venus, Earth, Mars, Jupiter, Saturn, Uranus, and Neptune. They will use the mnemonic, "My Very Energetic Mother Just Served Us Nachos" to remember the order of the planets. They will conceptualize how these planets can look so small but actually be very large. They will also learn how gravity affects planets. They will learn about how days and years work on each planet.

Learning objective
Students will be able to name the planets and identify their physical features.

Introduction
Students will think about Earth and how it is different from other planets in the solar system.

Instruction
They will "stargaze" and drag stars to the galaxy to see what could be in our solar system. They will learn a mnemonic to remember the planets in order from the sun: "My Very Energetic Mother Just Served Us Nachos." They will discuss how big the planets are and talk about an effect that can make things that are very large appear small. They will put their thumbs up to a larger object, such as a clock, and slowly walk backward. They will discuss that at a certain point, their thumbs covered the clock and that the size of the clock didn't change, but their distance from it did. They will transfer this knowledge to the solar system.

They will also talk about the asteroid belt, a region between the orbits of Mars and Jupiter. The next four planets, or the outer planets, are much larger. They are Jupiter, Saturn, Uranus, and Neptune. Students will read facts about these planets as well. They will then review the mnemonic they learned at the beginning of the lesson.

Quiz
Have your students answer these multiple-choice questions about the planets!

Closing
Students will research a planet and write some lyrics about it to the tune of "Twinkle, Twinkle Little Star."