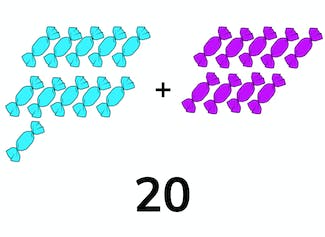 Lesson
Grade 1
Try Gynzy for free
General
Students learn to add to 20. They know which numbers together add to 20.
Relevance
Discuss with students that it is useful to be able to add, so you know how much you have of something. For example, if you have been saving money, and are given more money, it is nice to know how much money you have in total.
Introduction
Say that the number 20 must be decomposed. Show this with dots and arrows showing the number bonds. Have students write the numbers in their notebooks and erase the grey box on the interactive whiteboard to show the answer.
Development
Discuss with students that there are different addition problems whose total is 20, and show this on the interactive whiteboard with the child, grandpa and 20 candies. The candies are divided differently every time. Show all of the divisions and discuss the addition problem that is represented by each division. There are only 20 candies that are being split differently each time, so the total of all the different divisions is still 20.
Next, show the pencils. Say that you can add the pencils by counting the pencils in the first group, and then counting on with the pencils in the second group. Count the pencils aloud. Do not count the second group as a separate group, but count on from 18. Practice with two more examples with sandwiches and soda to add to 20 by counting on.
Explain that there are also addition problems in which you do not have objects to count, but that you use numbers to represent the objects. You still count the second number with the first. Students can use blocks to count, or blocks to represent the first addend for support. Discuss two addition problems as a class whose total is 20 without visual support.
Next show the pencils to the students again. This time, they aren't asked to add the pencils, but to discover how many more they need to fill a box of 20 pencils. Explain that you can calculate how many more you need to count on to 20 from the first addend. Practice this again with lollipops and candies and have them count on to reach 20 and then write down that number as the second addend. You can also do this with addition problems in which you can't see count the objects, you just get the first addend and count on to reach 20. Discuss the exercises given as a class.

Check that students understand addition to 20 by asking the following questions:
- How do you add two addends together?
- What do you do if you want to discover the missing addend in the problem: 18 + ... = 20?
Guided practice
Students first practice adding with visual support, and then are asked to determine which numbers together total 20.
Closing
Discuss with students that it is important to be able to add to 20, so you can calculate totals. Show the maze on the interactive whiteboard. Students must select the two numbers whose total is 20 if they want to escape the maze!
Teaching tips
Students who have difficulty adding to 20 can be supported with the use of manipulatives, like MAB blocks. Have them set out the blocks to represent the given addends and then count the blocks of the first addend, and count on with the blocks of the second addend.
Instruction materials
Optional: MAB blocks or other manipulatives