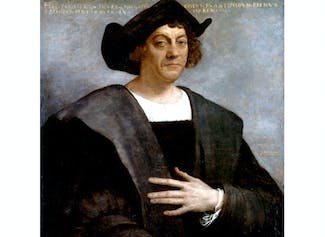 Lesson
Grade 4, 5, 6, 7, 8
Try Gynzy for free
General
In this lesson, students learn about the importance and impact of Columbus’ journey to the New World. They will discuss the motivations that led European explorers to sail west. Students learn about Christopher Columbus, Ponce de Leon, John Cabot, and Ferdinand Magellan. The lesson explores the impact of the Age of Exploration on indigenous people and on our knowledge of the world.

Learning Objective
Students will be able to detail the journeys of various European explorers and explain how European countries tried to extend their power into the New World.

Introduction
Begin by asking students why they think people might leave their comfort zones to go somewhere completely unknown. Ask them to think of some people today who explore unknown territory. What impact do those explorations have? Why are they important? Introduce the European explorers and Columbus Day, and have students share their prior knowledge of Christopher Columbus. Display the world map and see if students can identify the continents and oceans. Erase to reveal the names underneath the gray boxes.

Instruction
Go over key terms like “New World,” “colony,” and “indigenous” then introduce what became known as the Age of Exploration. Explain the motivations for exploration during this time: glory, gold, and God. Discuss the role of competition among European rulers and ask students to share their thoughts on these different motivations.

First, students learn about Christopher Columbus and his journey to find a route to Asia. Explain that Columbus’ expedition led to the funding of many more trips that would shape the world as we know it today. Next, students learn about Ponce de Leon, followed by John Cabot, and Ferdinand Magellan. Discuss the impact these explorations had on indigenous groups. Students will then fill out a chart to compare what they’ve learned about each explorer. There is a printable worksheet included for this activity.

After this, have students write a persuasive argument to a king and queen explaining why they should support and fund an expedition. Discuss the effects these European voyages had on indigenous people like bringing disease and enslaving Native Americans. Students will then make observations about the image depicting the arrival of European explorers.

Closing
Review the main reasons for European exploration and discuss the possible pros and cons. Finally, have students compare the points of view of European explorers and Native Americans.