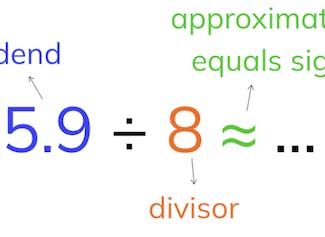 Estimated division with decimal numbers with 1 or 2 decimal places

Learning objective
Students will be able to estimate quotients of decimal numbers with 1 or 2 decimal places divided by a whole number, and vice versa.

Introduction
First you have the students practice rounding, by asking them which side the marble will roll to. Then you play the division ball game. You throw the ball to a student and name a division problem. The student catches the ball, gives the answer, and then throws the ball back.

Instruction
First you explain what the dividend, the divisor, and the approximately equals sign are. Then you tell the students that with estimated division, you always look for a dividend that is divisible by the divisor. Next you show estimation step by step. Explain that you first think of the numbers that are divisible by the divisor. Look for the outcome that is the closest to the dividend. After that you can solve the problem. Explain that it is important to be as close as possible to the number from the original problem. Explain why certain estimated quotients don't work, because they do not round to a whole number (for example, you can't round 68.9 ÷ 6 to 70 ÷ 6, but you can round it to 66 ÷ 6). Next the students are going to estimate quotients on their own. For this, explain that you sometimes also need to round the divisor, if it is a decimal number. From there, you start looking for a good estimated quotient. Show this step by step using the problem 47.84 ÷ 5.1. After this, have the students estimate the following problems and ask how they rounded. Next, discuss whether the exact answer would be more or less than the estimate. Have the students reason how you know this. Recall the meaning of the < and > symbols. Finally, walk the students through the steps of solving a story problem.

Check whether the students can estimate quotients by asking the following question:
- What do you do with decimal numbers if you want to estimate a division problem?

Quiz
The students test their understanding of estimated division with decimal numbers with 1 or 2 decimal places through ten exercises. In each of the exercises, the students must round the dividend to a number that is divisible by the divisor. Some of the exercises are word problems.

Teaching tips
When students have difficulty with estimated division with decimal numbers with 1 or 2 decimal places, first practice with looking for a good estimated quotient. For this, have them write down the outcomes from the table of the divisor.