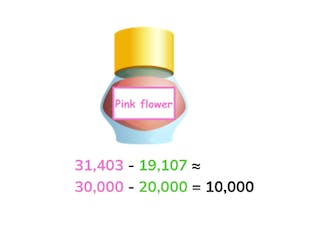 Lesson
Grade 4
Try Gynzy for free
General
Students learn to estimate the difference with numbers up to 100,000 by rounding to the nearest thousand or ten thousands number.

Learning objective
Students will be able to estimate the difference with numbers up to 100,000

Instruction
Explain to students that when estimating the difference you start by rounding the numbers in the problem to make an easier problem and then solving the rounded equation. The problem 49,183 - 10,722 ≈ can be solved using the estimated problem 50,000 - 11,000. Then use another example to explain that you can round the numbers to the nearest thousand or ten thousands number. Ask students to round each number and ask students to explain their strategy. Emphasize that, while estimating, there are different possible solutions. Practice matching the next three problems to their best estimated problems. Then, together with students, practice finding the estimated difference by rounding the numbers in the given problems and solving the estimated problem. Next practice estimating the difference and then solving for the exact difference. Together, discuss that the estimated difference and the exact difference are quite close to each other. Then explain that you can also estimate the difference with multiple numbers (more than 2). Remind students that they can also choose to add the multiple subtrahends together to subtract them together from the minuend. Practice with exercises in context of miles, where you ask about how many miles are left to fly.

Check that students are able to estimate difference with numbers to 100,000 by asking the following questions:
- Why is it useful to round numbers and then subtract using rounded numbers?
- When do you round a number to the nearest thousand or ten thousands number?
- How do you round numbers like 12,289 and 49,305?

Closing
Discuss the importance of estimated difference with the class and remind them that it can help them quickly get close to the correct answer of a given problem. It can also help them to check their exact difference. Discuss when or why you would round to a nearest thousand or ten thousands number. To close, have them match the subtraction problems, the estimated difference and the differences together. As a last exercise, play a rounding game in which students must stand if they round up and sit if they round down.

Teaching tips
Students who have difficulty with this learning goal can be supported by practicing with subtraction using ten thousands numbers. Make sure that students are not solving the exact problem and then rounding the difference that they find but that they start by rounding the numbers in the subtraction problem. Have them explain their rounding as they walk through solving the problem.