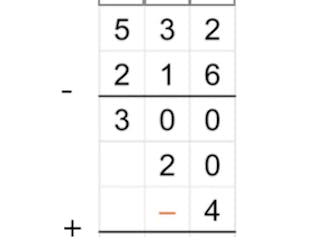 Partial differences subtraction to 1,000 with regrouping

Learning objective
Students will be able to subtract using the partial differences method to 1,000 with regrouping of the tens and hundreds numbers.

Introduction
You should different images on the interactive whiteboard. The images form amounts. Ask the students which amounts belong with which TO-table. Ask how they know this. Then you show a number of eggs for which the correct amount must be dragged to each side.

Instruction
Explain that for partial differences subtraction you put the numbers one under the other. Then you can subtract them from one another by working from left to right. So you start with calculating the hundreds numbers. You subtract them from each other. Then you subtract the tens numbers and finally the ones numbers. With subtracting the ones values it can happen that you come up short. In that case you write a minus sign. You put all these answers in the diagram and write the intermediate differences are. You then add all of the answers together, besides the ones value if you were short. You subtract that number. Then you will arrive at your final answer. You put this final answer at the bottom of the diagram. Next, there is a problem in a diagram for which different rows are marked in yellow. Ask the students if they know which intermediate difference belongs in each colored row. This is how you can check whether students know which steps they must take. After this, have the students solve a few problems using partial differences. Then you explain that you can also come up short in the tens numbers. In that case, you also write a minus sign. Then practice partial differences further with two problems, for which one the diagram is already filled in and the other must still be filled in.

Closing
You discuss again with the students how it is important to be able to subtract with partial differences to 1,000 because that is how you can solve problems in steps. Check if the students know that in partial differences they must work from left to right and if you come up short in a number they must add a minus sign. Have the students come up with some problems on their own by dragging numbers into the HTO-diagram. Make sure that for some of these problems there is a shortage in the ones values, tens values, or both.

Teaching tips
For students that have difficulty with subtracting using partial differences, you can repeat the meaning of H T O and remind them of how you put numbers into an HTO-diagram. Write down the intermediate steps. You may mark the hundreds numbers, tens numbers and ones values, so that it is obvious what they are subtracting.