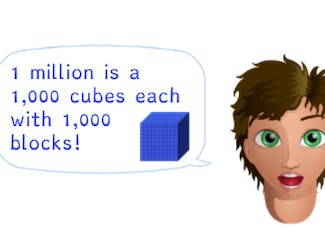 Lesson
Grade 5
Try Gynzy for free
General
Students are introduced to millions. They are shown how to write millions in two ways and where millions are placed in the place value chart.

Learning objective
Students will be able to recognize, compare, organize, and write down millions.

Instruction
Show students the number line from 0 to one million with intermediate marks of one hundred thousand. Then ask students which number comes after 999,999. Show this using the place value chart with MHtTtThHTO chart. Tell students that the number has six zeroes. That is the same as 1,000 cubes each with 1,000 blocks! Show the number in the place value chart. Ask students to come up with what objects might exist in the millions. Two examples are given in the form of grains of sand and bacteria in your stomach. Other possible answers include dollars, inhabitants, tourists, etc. Ask students to think about this question in groups and then write their suggestions on the interactive whiteboard. Then together as a class see how many more you must add to the number 631,000 to make one million. Use the MHtTtThHTO chart to help make the steps required clear to the students. Start by composing the thousands, ten thousands, and hundred thousands. Then explain to students that there are two forms of notation for millions, namely fully and abbreviated. 1,300,000 can also be written as 1.3 million. Show the number in the chart. Then practice writing the given numbers both fully and in abbreviated forms. You need to be able to recognize and write both to be able to compare numbers. Explain that if you want to fully compare numbers, that you must write them fully. Practice this with a few comparisons. Then ask students to think about the different notations. When would you use the abbreviated form? And where would you use the fully written form? Abbreviating is much faster, as you don't need to write all of the zeroes. In addition you don't get confused with the number of zeroes that are required or where the comma's belong. Writing the numbers fully is important when you want to know exact numbers and it is important when you need to calculate using millions. Ask to see if students can come up with other examples or situations.

Quiz
Students are given exercises in which they are asked to place given numbers in order from smallest to largest, to write given millions numbers in abbreviated forms fully, as well as determining how many more are needed to reach a million.

Closing
Discuss the importance of knowing millions and both notations of writing millions. Discuss that you can come across millions numbers in the newspaper. Read the given example on the interactive whiteboard. Then ask students to match the full and abbreviated notations of the numbers. They then must place the given numbers in order from least to greatest. The first number has already been given. Ask students to explain their strategy. To close the lesson, ask students to look up a city that has more than 1 million inhabitants. Then have them write the number of inhabitants as a full and abbreviated number, London is given as an example.

Teaching tips
Emphasize the fact that 8,100,000 is the same as 8.1 million. The only difference is notation. Have students who have difficulty with these larger numbers first practice with 1 decimal place number, before moving to 2 or 3 decimal places. Students who are ready for a challenge can be given more complex numbers like 8,104,387.