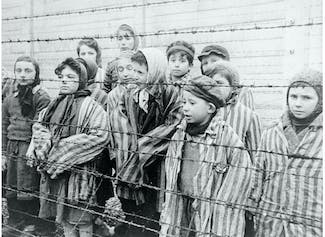 General
This lesson serves as an overview of the Nazi efforts to carry out the genocide of the Jewish population. The lesson goes over “The Night of Broken Glass,” the ghettos, and the use of concentration camps. Students also analyze a quote by Gerda Weissmann Klein and discuss why it’s important to be mindful of history.

Learning Objective
Students will be able to explain the Nazi methods of mass murder, including the establishment of Jewish ghettos, concentration camps, and killing centers.

Introduction
Briefly introduce the Holocaust and Adolf Hitler’s beliefs about a “master race.” Explain that 11 million people were murdered during this time, then have students share what they already know about the Holocaust.

Instruction
Go through the beginning stages of the Holocaust, describing the Nuremberg Laws and the dehumanizing treatment of Jews. Next, describe the night known as Kristallnacht and the efforts of Jews to escape Germany. Introduce Gerda Weissmann Klein, a survivor of the Holocaust. Tell her story, then have students list 3 adjectives to describe what Greda may have felt as a lone survivor in her family.

After this, describe the ghettos in which Jews were forced to reside. Have students write a sentence explaining the significance of the words: “Aryan,” “Kristallnacht,” and “Ghetto.” Discuss Hitler’s “Final Solution” and his use of concentration camps to murder not only Jews, but also gypsies, Poles, Russians, the disabled, and homosexuals. Finally, students analyze Gerda’s quote, “Survival is both an exalted privilege and a painful burden.”

Closing
Students think of at least 2 events that led to the Holocaust. Then they will write a response explaining why it is important to remain mindful of history.