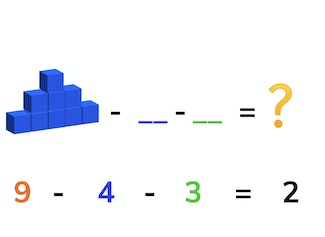 Subtraction to 10 with three numbers

Relevance
IT is important to be able to subtract two numbers from a total number. In some situations it is required, like when you are handing out candies and want to know how many you are left with in total.

Development
Start by discussing the importance of being able to subtract with three numbers, giving the practical example of needing to hand out candies to more than one person and wanting to know how many you have left. Next, explain to students how to solve a subtraction problem with multiple numbers (subtrahends) using blocks. Tell the students to first look at how many there are in total. This is the first number (minuend) of the subtraction problem. Then take the next number (subtrahend) and subtract that from the first number. Use that difference and subtract the final number (subtrahend) from the intermediate difference. Discuss with students that the order of the second and third numbers (subtrahends) does not matter, as long as the first number(minuend) stays in the same place at the start of the subtraction problem. Different methods to solve these subtraction problems follow on the interactive whiteboard like using the rekenrek or blocks. Discuss these as a class.

Guided practice
Students first practice with a subtraction problem that starts at 5, followed by a problem starting at 7 and then at 9.

Closing
Discuss with students what they think of subtraction with three numbers. Practice with two subtraction problems with visual support and then close with a game. Divide the class into groups. One student must stand in the middle of the group and comes up with a subtraction problem with three numbers. They spin in the middle with their eyes closed, pointing at their group members. When they stop spinning, the student they are pointing at must find the difference. If the answer given is correct, that student moves to the middle.

Teaching tips
Students who have difficulty with this can be supported by the use of manipulatives or MAB blocks.