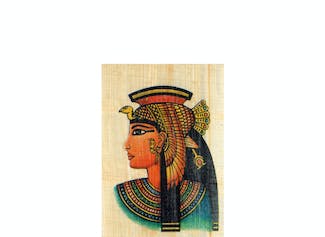 Cleopatra: The last pharaoh of Egypt

General
Cleopatra was a remarkable woman who led Egypt towards the end of the reign of the Ptolemaic dynasty, which was founded by a Greek general and companion of Alexander the Great named Ptolemy. Though at one point she was banished from her home country, she became popular with the people and was the first member of her family to actually learn the Egyptian language. This lesson explores her remarkable life.

Learning objective
Students will be able to describe details related to Cleopatra's 21 years as pharaoh of Egypt.

Introduction
Students are asked to think about what it would be like to be put in charge of an entire country at the age of 10, with all the personal, social, and political implications that would have.

Instruction
Cleopatra was a member of the Ptolemaic dynasty, which ruled Egypt for about 300 years before Cleopatra and her 10-year-old brother Ptolemy XIII took over the throne of Egypt in 51 BC. Contrary to popular belief, historians now believe the family was of Greek descent, rather than Egyptian. Amazingly, Cleopatra is thought to be the only person in her family to learn the Egyptian language, one of more than 7 languages that she learned in her life.

Partly because Cleopatra was much older than her brother when they took the throne, she quickly became the more dominant ruler and he became jealous of her, and soon she was banished from the country by her jealous brother. Eventually, she returned to power in Egypt with the help of Roman allies, although her relationship with Rome would eventually be her undoing. Cleopatra was captured by a Roman army and sentenced to spend the rest of her life as a slave, but she chose to take her own life instead at the age of 39.

Quiz
Students will respond to ten true/false and multiple-choice questions.

Closing
Cleopatra was a remarkable leader and figure in many ways, but little is known about her life. Students are asked to think about what other things they would like to know about Cleopatra if they were able to interview her, and to think of some questions they would ask her.

The closing activity has students design and draw a coin about themselves that describes what their leadership style would be like if they were Pharaoh of Egypt.