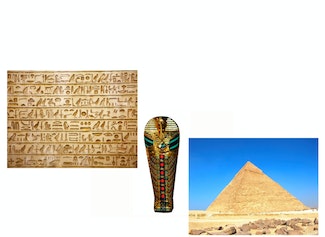 Lesson
Grade 3, 4, 5
Try Gynzy for free
General
Ancient Egypt is a fascinating topic to study because they were so advanced in many different fields, and left behind many different monuments, objects, and ideas that are still relevant to us today. This lesson takes a closer look at some of the innovations the Ancient Egyptians were responsible for.

Introduction
One of the most important aspects of Ancient Egypt was the Nile River. The Nile River provided food, transport, and building materials and was an important feature in Egyptian culture.

Instruction
There are many different innovations and ideas we could credit the Ancient Egyptians with, but four examined in this lesson are hieroglyphics, Pharaohs, mummies, and The Pyramids. Hieroglyphics are symbols or pictures used to represent sounds, syllables, or words. Our understanding of hieroglyphics is largely thanks to the Rosetta Stone, which included a message in Greek and hieroglyphics and allowed people to translate based on Greek, which was understood.

The concepts of Pharaohs, mummies, and The Pyramids are all related and familiar based on movies and other parts of our modern culture. Mummification, which was a very technical process, was done out of a belief in the afterlife. Often times mummies were interred with items that loved ones thought might be useful on their journey in the afterlife. When a Pharaoh died, they were often mummified and often laid to rest in a large tomb known to us as the Pyramids of Egypt.

Closing
Students will be asked to reflect on important cultural traditions in Ancient Egypt. They are also asked to wonder what types of images and messages a Pharaoh might decide to put on his or her sarcophagus.