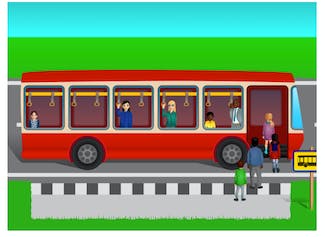 Lesson
Grade K
Try Gynzy for free
General
The students can add to 10 using the context of a bus ride.
Relevance
If students want to be able to calculate well, it is important to be able to add to 10. The context of a bus ride helps to visualize the addition problem.
Introduction
Show the students the image of a bus and ask who in the class has ever travelled by bus. Ask where they went, and if it was busy in the bus. Then have students practice counting amounts by having students count the number of students who are waiting for the bus.
Development
Explain, using the set of three bus images, that you first look at how many people are on the bus, then at how many people are waiting for the bus, and finally calculate how many people leave on the bus. You do this by counting all the people who already were in the bus, and adding that number to the number of people waiting for the bus. Ask students what the first number of the addition problem is, what the second number in the addition problem is, and what the sum is. Repeat that the sum is the total of the two numbers counted together.
Next practice two more exercises with the students in which they can count the people waiting for the bus in the images. Practice this with a few examples.
Finally show students that there are also bus examples where you can't count the people, but you are only given a number. Explain that you first count the number of people on the bus, and then add the number that is written at the bus stop. Those two numbers together make the sum, or total of people on the bus.

Check that students can add to 10 using the bus method by asking the following questions:
- What steps do you take to solve a bus problem?
- What total do you get if you have a bus with 2 people, and 2 more people get in?
- What total do you get if you have a bus with 3 people and 5 more people get in?
Guided practice
First complete the sum that belongs to the shown image. Ask the class how many people are on the bus, how many are getting on, and what total number of people will ride away on the bus. The students can count the people in the image. Next students must calculate using the bus and a given number. Finally students are only given busses with numbers, and no people to count.
Closing
Repeat the learning goal and ask what steps you take while solving an addition problem using the bus method. Ask students how many people leave on the bus if there are 5 people on the bus and 3 more get in. Play the game "blind bus driver". One student is selected to be the bus driver, and you select a few students to be bus passengers. The bus driver closes their eyes and you point at a few students to sneak onto the bus. The bus driver must guess how many students have snuck on board and must name the total number of students on the bus. Repeat with a new bus driver.
Teaching tips
Students who have difficulty can be helped by repeating the steps of using the bus method. First count how many people are on the bus, next count how many get on the bus, and finally counting the total number of people on the bus. You can also have them use blocks to represent each person who gets on the bus and then have them count the blocks. You can also start with smaller numbers, with totals to 5, and then build up to totals of 10.
Instruction materials
blocks